We sadly report that James Kidd (Ret. Fire Fighter) has passed away in July 2016. Jim has been a Board Member of the AHRME since 2004. We are going to sincerely miss him as a friend and loyal advisor for the Association of Hialeah Retired Municipal Employees.

Our prayers and thoughts go out to his family.

As a retiree of the City of Hialeah you are still eligible
to be member of the Hialeah Municipal Employees Federal Credit Union. 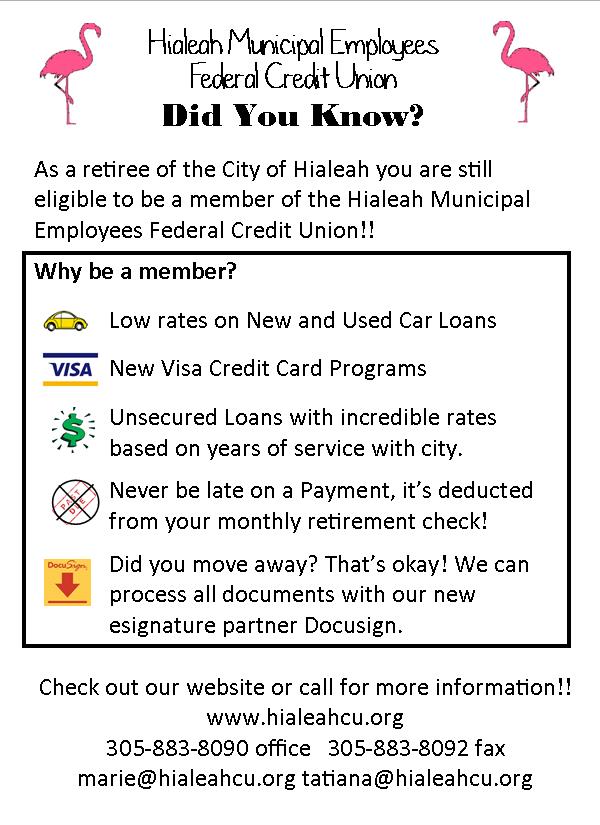 Report: Healthcare for government retirees a ‘hidden’ threat to taxpayers

Every year, Miami officials have to make a choice: invest tens of millions of dollars into a trust to finance decades worth of healthcare subsidies owed to retirees, or pay only the healthcare bill coming due now, at a fraction of the cost.

And every year, like so many other South Florida municipalities, the city takes the cheap way out.

Coming off the heels of a prolonged recession, it’s a decision that hasn’t been all that difficult. Two years ago, it saved Miami $38 million — about the cost of running the parks and recreation department. Around South Florida, a number of other cash-strapped governments have done the same, taking a pay-as-you-go approach to retirees’ health benefits instead of financing long-term costs that can top $100 million.

But following a recent change in government accounting standards, elected officials and administrators around the nation are facing pressure from credit agencies and policy advocates to pay down healthcare debts instead of foisting ballooning bills onto future generations of taxpayers. Answering the call could prove costly, but proponents of the change say it could avert a fiscal disaster.

On Tuesday, the non-partisan Collins Institute released its latest report on public pensions, this time focusing on the “hidden” cost of retiree healthcare benefits, referred to in the public sector as Other Public Employee Benefits (OPEB). According to University at Albany professor David Matkin, the author of the report, the total OPEB burden in Florida is more than $8.5 billion.

But he said most governments are doing little to pay down their debts. And they’re not talking about it, either.

“There’s very little transparency on these issues,” he said during an online conference with the media.

Retiree healthcare liabilities for government institutions have existed for decades. Many governments offer their employees healthcare benefits that might pay a percentage of their premiums or completely subsidize their coverage. In Florida, all local governments are also required to give retirees the option to purchase health insurance coverage offered active employees, and at the same rate.

But it wasn’t until the mid 2000s that governments were required to list their longterm OPEB liabilities on their financial statements and pushed to fund those debts on the front end rather than the back.

Coral Springs, Davie, Miami Beach and Orange County are among the entities that have created funds. Many Florida governments, however, have chosen to continue paying only their actual costs on an annual basis. Using financial reports from 2011, Matkin found some of the largest liabilities in South Florida, including $541 million in Miami and $433 million in Hollywood.

“Most governments are avoiding making that hard decision by choosing the short-term, easy solution,” said Matkin.

But choosing to forgo OPEB trust funds is for some as much a risk-reward decision as it is a decision to avoid hefty bills. Jose Fernandez, Miami’s finance director, noted that OPEB liabilities — which, like pension costs, are determined by weighing money owed with expectations of how long retirees will live and whether they’ll get sick — include hypothetical debts that won’t ever come due. In addition, the city, like Miami-Dade County and the Miami-Dade School Board, is self-insured, so the city is essentially paying itself.

Fernandez said Miami taxpayers should probably be more concerned if the city were raising taxes or cutting services to pay down hypothetical liabilities.

“If I was a city resident, I wouldn’t be losing any sleep over an OPEB obligation,” he said. “You’re not really looking at a hard dollar liability.”

Like Miami, Hollywood officials, who are still grappling with employee pension costs, were faced last year with a $9 million pay-as-you-go bill for OPEB, versus a $29 million cost to fully fund their program.

Jones, 62, and Lomax, 65, are among thousands of retirees whose annual cost-of-living increases took a trim Jan. 1 under a new state law intended to rescue two struggling city pension funds.

Their pensions continue to grow, mind you, just not by as much as they were promised when they retired.

Because of that broken commitment, their lawyers say the legislation negotiated by Mayor Rahm Emanuel with some city unions should be declared unconstitutional.

In the meantime, the retirees want its provisions set aside temporarily until the Illinois Supreme Court has ruled on a similar challenge to a new state pension law.

The Emanuel Administration counters that the law is sound and halting its implementation would risk a financially disastrous negative reaction from credit ratings agencies that want the city to fix its pension problems.

The examples of Jones and Lomax are reminders that, despite what we know to be the bloated pensions of many city workers, little people also will get hurt in the process of cleaning up the mess — although arguably not as badly as they might if the pension funds were allowed to continue on their previous path to insolvency.

But the two grandmothers’ pensions also are a reminder of the foolish mistakes that got us into this jam in the first place.

Jones and Lomax were both beneficiaries of early retirement programs, magical deals in which city workers were allowed to retire early with full benefits.

City officials touted such programs as resulting in an overall taxpayer savings as older workers were replaced by less-costly new hires.

The savings was a mirage, resulting only from the fact the city wasn’t legally required to pay enough money into the pension funds to support the benefits that would eventually have to be paid. It was just one of many such short-sighted decisions now coming home to roost.

Jones was 51 and Lomax 54 when the city offered them what they saw as an attractive retirement package in 2004. They’ve been drawing a pension ever since.

Under the 3 percent annual compounded cost-of-living adjustments applicable under the previous law, those pensions are now some 34 percent greater than when the women retired.

Jones, who spent 33 years working for Chicago Public Library, is scheduled to receive a pension of $42,163 this year. That’s $360 more than she got last year, but $900 less she would have received under the old law. She does not receive Social Security.

As you can see, neither woman is on easy street. Jones lives with her mother and two grandchildren and says she is their primary financial support. Lomax lives alone with her chihuahua and two birds and takes 10 medications daily for her blood pressure, congestive heart failure and asthma. Both women tell me they never worked politics.

The new cost-of-living adjustment will pay retirees only 0.85 percent more this year and does not compound. Retirees will receive no adjustment at all in 2017, 2019 and 2025.

Depending on the size of future adjustments, someone with even a relatively modest pension benefit such as Jones and Lomax will lose tens of thousands of dollars over a 20-year period. That’s why the small change results in a huge savings to taxpayers.

Lomax, for one, doesn’t seem so sure she’ll live that long if the city doesn’t restore the full increase, which she calls a “life-or-death situation” because she can’t afford to pay for all her medication.

Retirees emphasize the reduced pension payments are coming at the same time the city is phasing out their subsidized health insurance, which means their net pay is lower than it was last year.

If you’ve followed my coverage of this issue, then you know I’m sympathetic to the needs of state and local governments to pare back the pensions, and I believe Emanuel has struck a reasonable approach.

But we should never lose sight of what a lousy thing it is to take away pension benefits from people who are already retired and were counting on the promises made to them by the people we elected to represent us.

Keep that it mind when those same elected officials work up their nerve to hand us the bill for our end of the deal.